In memory of John Lewis Jones 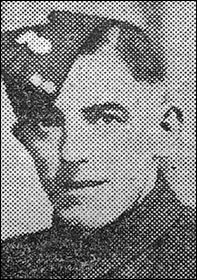 John Lewis Jones was the only son of Hugh and Ellen Jones. They lived at Henysgoldy, a house which belonged to the parish church and was previously used as a school. Hugh was churchwarden and Ellen the verger. Hugh worked in the engine room at RAF Valley in the Second World War, and continued there until he retired in 1963.

John had four sisters, Nan, Cassie, Jane and Betty, and attended Gwalchmai Primary School. He grew into a quiet, shy young man. His niece Gladys Roberts’ last memory of him is dancing the hokey cokey in the living room at Henysgoldy with family and army friends during his last home leave.

Margaret Williams, daughter of the rector, recalls John giving her a box of liquorice allsorts during a Sunday School trip, when she was about three years old, because she’d injured her foot.

After leaving school, John worked as a lorry driver for Henry Edwards, a builder based in Bryngwran. He joined the army in 1943, serving as a Private with the First Battalion of the Queen’s Royal Regiment (West Surrey).

In May 1944 his battalion was sent to Kohima, India, where British and Indian forces had been fighting the Japanese for a month. The Battle of Kohima lasted for more than two months and thwarted Japan’s attempt to invade India from Burma, then under Japanese occupation. Some historians regard it as a turning point in the war in the Far East.

John died on 11 May, aged 22. He is buried at Kohima War Cemetery, where there is also a memorial to his battalion.

An obituary in a local newspaper described him as a homely boy who thought the world of his parents. His cousin, Mrs Glyn Owen, played the organ at his memorial service in the parish church. There is a memorial stone to John in the church.