In memory of William John Walford 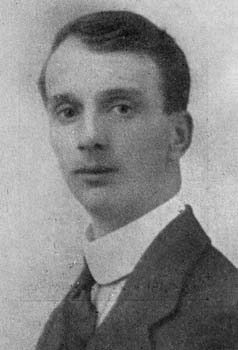 In memory of William John Walford

William John Walford’s parents lived in Dean Street, Bangor. He had a talent for recitation in Welsh. This is an ancient performance art, dating back to medieval times. Children and adults still compete at recitation today, usually at eisteddfodau (festivals of literature and arts).

William won a prize for recitation at the 1915 National Eisteddfod, which was held in Bangor. It was the first National Eisteddfod held during the war, as the one scheduled for 1914 was postponed. His bardic name was Gwilym Menai. Gwilym is the Welsh equivalent of William. The Menai Strait separates the mainland around Bangor from the island of Anglesey.

Had the war not intervened, William would probably have gone on to be a significant figure in Welsh culture. A remembrance book, published after First World War, records that he had a great talent for reciting in a way that gave pleasure to audiences.

Like many others from the Bangor area, he enlisted with the Royal Garrison Artillery. While at the front, he was poisoned by gas during a chemical warfare attack. He was taken back to Britain but died in hospital in Tooting, London, aged 32. His body was returned to Bangor for burial at Glanadda cemetery. He left his wife and his son, Alwyn.