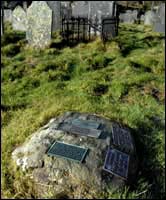 Alfred Oliver was an accomplished landscape painter whose studio in Capel Curig faced the Snowdon massif. He hailed from Nottingham, where he was a member of the Nottingham Society of Artists.

In 1905 an oil painting of his from the society’s exhibition was chosen for the art collection of Nottingham Castle, but he felt the £3 payment he received was insulting. When sending the receipt he wrote that he had thought of keeping the payment for the payees’ autographs but decided to send his children to Llandudno for the day with the money. 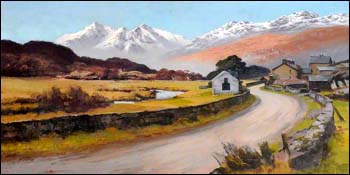 His son Thomas Alfred died in 1917 on active service with the Royal Flying Corps. Thomas’ body was never found. Subsequently Alfred kept an aircraft propeller in his studio as a memorial. Tom is named on Capel Curig war memorial.

The family tombstone takes the form of a boulder to which are attached cast metal plates with details of the deceased. Alfred’s plaque records that he died on 29 January 1944, aged 76 years, and includes a memorial inscription to “Tom Oliver RAF, son of the above, killed in France 14 August 1917”.