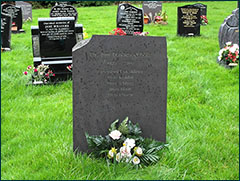 ‘Dr Jim’, as he was affectionately known in Beaumaris, was born in 1923 in Boncath, Pembrokeshire. He studied at Trinity College, Carmarthen, and the London School of Economics.

He joined the RAF Cadets and Volunteer Reserve as a student in Carmarthen, and enlisted in the RAF in 1943. He had a basic grasp of German, so he was selected to broadcast false codes for 101 Squadron. He parachuted into the Netherlands when his Lancaster bomber was shot down in February 1944. There was no news of his whereabouts, so the Air Ministry’s Casualty Unit sent his belongings to his parents. His death in action is even recorded in the Book of Remembrance in St Davids Cathedral!

However, Jim was sheltered by the Resistance until he was betrayed to the Germans in August 1944, after which he was a prisoner of war at Stalag Luft 7 with other airmen. As the Russian army approached in January 1945, the inmates were marched for weeks in harsh weather to another camp.

After the war in Europe had ended in May 1945, Jim began a career in education. He became Montgomeryshire’s director of education in 1958 and principal of Bangor’s Normal College in 1969. He chaired fundraising appeals for the local NHS which raised millions of pounds for the Ysbyty Gwynedd’s first MRI scanner, among other things.

Jim had two daughters with his wife Nesta. The family often went to the Netherlands for holidays, visiting families which had taken great risks to help him during the war.

After retiring in 1985 he moved to Beaumaris and chaired the children’s charity Wales NSPCC. Dr Jim Davies received the OBE in 1989 and was made an Honorary Burgess of Beaumaris in 2002. His wartime autobiography, A Leap in the Dark, was published in 1994.