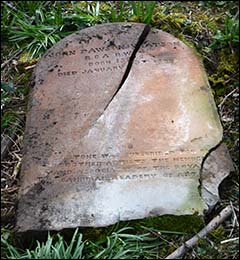 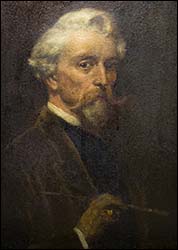 John Dawson Watson grew up in Sedbergh (then in Yorkshire) and studied at Manchester School of Art and the Royal Academy, London. In 1858 he married his cousin, Jane Dawson Edmonson. In the 1860s and 1870s he became nationally recognised for his art, his theatrical costume designs and his knowledge of historical dress.

In 1884, aged 52, he left London to live and work in Conwy and Betws-y-coed, obtaining early commissions from Thomas Dutton of the Belle Vue Hotel, Trefriw. He became a member of the Royal Cambrian Academy of Art (RCA), then based in Plas Mawr, Conwy.

From around this time, John also provided a large number of paintings for Conwy’s Castle Hotel, which was run by Sarah Dutton, Thomas’ brother. When remodelling of the building began in 1891, John was engaged to provide more artworks, many of which you can view in the hotel’s ground floor (where non-resident visitors are welcome). Most of the paintings reflect his interest in historical and theatrical costumes.

Some of his sketches are also displayed on the hotel’s walls. They include a depiction of a dog (below left) at the scene of a shipwreck, drawn when he was seven years old. You can also see his bust and self-portrait at the hotel. 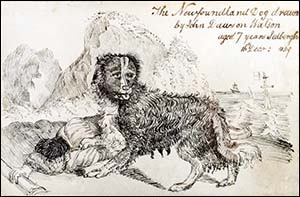 He died of a respiratory infection on 3 January 1892, aged 59. Fellow members and associates of the RCA subscribed to pay for his gravestone.

The parish burial register recorded his address as Plas Uchaf, Conwy, but a newspaper obituary reported that he’d lived in the Castle Hotel for the previous two and a half years. An unsubstantiated story that his paintings were provided in lieu of board and lodging is therefore plausible. Some have suggested that this was the artist’s only means of payment.

With thanks to Will Swales