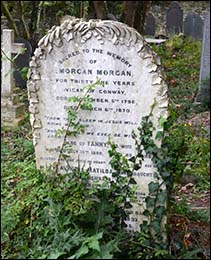 Morgan Morgan was vicar of Conwy for more than 30 years, a period when the town underwent major changes with the arrival of the railway. He was involved in many charitable activities. The purpose-built National School in Rosehill Street was opened soon after he became vicar. 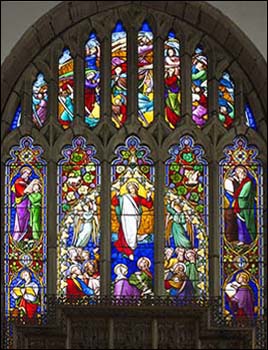 e Morgan was a Liberal MP and Judge Advocate General under William Gladstone. John Edward Morgan was Professor of Medicine at Owens College in Manchester (forerunner of Manchester University) and successfully campaigned for medical degrees to be granted in Manchester. Henry Morgan was Master of Jesus College, Cambridge.

The Rev Morgan died aged 73 on 6 March 1870, a week after giving taking his last Sunday service at St Mary’s Church. The shutters of all commercial buildings in Conwy were kept half-closed as a mark of respect for five days, from his death until his funeral. Nonconformist ministers were among those in the funeral procession, despite the deep divide between chapel and church at the time. The Rev Morgan and the town’s chapel ministers had respected each other.

The large east window of St Mary’s Church (pictured) is a memorial to the Rev Morgan, unveiled in 1871.