Edmund Hugh Lewis Wigram was born in 1911 and studied at Marlborough College, at Trinity College, Cambridge, and at St Thomas’ Hospital. He was already an accomplished mountaineer by the time he went to university, where he joined the Cambridge University Mountaineering Club and rowed for his college.

He took part in the 1935 expedition to survey proposed routes for the first ascent of Everest. While in the Himalayas, he reached 20 summits higher than 6,100 metres (c.20,000ft). He returned to Everest in 1936, but the weather conditions were worse than experianced on any previous expedition and the attempt on the summit had to be abandoned. 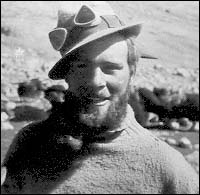 One of his first patients after qualifying as a doctor was a fellow mountaineer who dislocated his arm while on a Swiss mountain in 1937. Edmund successfully rotated the arm back into place and the injured man was eventually lowered by the climbing party once they had completed their climb.

He served in the Second World War with the Royal Army Medical Corps and the Lovat Scouts, a unit similar to the later SAS. He spent much of the war training soldiers in mountaineering. On 1 December 1945, he was climbing on Idwal Slabs with his wife Kit when he slipped and fell. He died of his head injuries at hospital in Bangor the following day. He left two sons, Peter and Bill, as well as Kit (Kathleen Maud). Her ashes were interred here after her death in 1998. The photo of Edmund appears here with thanks to Bill.