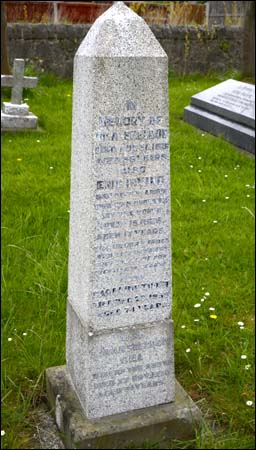 Eric Sheldon was 17 years old when he drowned in the Foryd estuary, Rhyl, during his lunch-hour break.

His father, WA Sheldon, had died in 1926 and is also buried here. By the time of his death, Eric was living with his mother, Sarah, and his stepfather, Harry Gill, in Seabank Road, Rhyl.

Eric worked at the Foryd timber yard. On 18 July 1929, he and four of his young colleagues went to the estuary to bathe. They became separated and most of them left the water. Finding that he’d gone out of his depth, Eric shouted for help. Three of the young men returned to the water to try to save him. The Rhyl Journal reported: “All efforts proved in vain, and life was quite extinct when Sheldon's body was eventually recovered.”

Eric’s mother lived for another 41 years after his death. She was buried here in 1970, after her death at the age of 91.