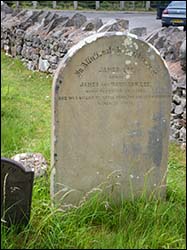 On the morning of Sunday 26 March 1871, James Lee attended St Tudno's Church with his brother and sister. They had walked from the Great Orme lighthouse, where their father James was the assistant keeper.

After the service the children took a shortcut across the clifftops back to their lighthouse home, but nine-year-old James decided to climb a cliff face to look for bird’s nests, as he often did. He  fell, and later his father spotted his lifeless body 180 metres (300ft) below the lighthouse.

In Victorian times, egg collecting was a common pastime and the eggs of rare birds found on the Great Orme, such as choughs and peregrine falcons, changed hands for a lot of money.

The eggs of seabirds were also taken for food. Many children risked their lives collecting bird’s eggs on the Great Orme and Little Orme, and often received one old penny for each egg. The practice continued during the Second World War. One local resident who recalls eating seabirds' eggs in wartime recalls that people accepted the eggs’ slightly fishy flavour at a time of food rationing.