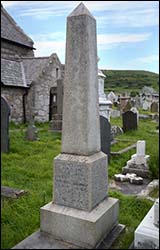 At the summit of the Great Orme, where the Summit Hotel now stands, was a semaphore telegraph station. It was set up by The Mersey Docks and Harbour Board in 1827, as part of a chain of similar stations for communication between Holyhead and Liverpool to report incoming ships for the benefit of the city’s merchants. 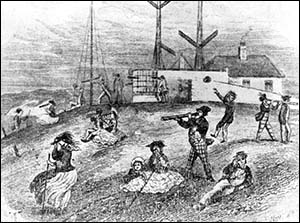 Job Jones was the most famous of the station’s keepers (1849-61). He opened it as a tearoom and kept a visitors’ book, which still exists, of the many Victorians who climbed up to enjoy the views of the wild North Wales coast. The Victorian cartoon on the right shows visitors outside the station on a windy day.

By 1862 he had moved to become the first keeper of the newly completed Great Orme’s Head lighthouse. He also operated the new electric telegraph which had replaced the semaphore stations. He and his family were still living there in 1877. He moved to Charlton Street, in the town, where he died in 1896 aged 88.