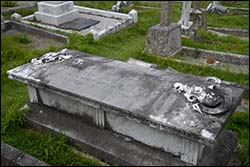 Langton Prendergast Walsh was born in Gujurat, India; his father served with the Bombay Army. His paternal grandfather, John Prendergast, had fought alongside the Duke of Wellington at the Battle of Waterloo.

Langton was six when his mother died during a sea voyage. He was sent to Stroud, Gloucestershire, where his father’s recently retired senior officer, Colonel Stather, looked after him.

Langton was educated in France and England. When he re-joined his father in India aged 17 he was fluent in seven languages. He worked for eight years for India’s Marine Postal Department, ensuring safe movement of international mail. He accompanied the mail, over land and sea, from India through Egypt and Gibraltar to Southampton. He filled his time writing articles for the Times of India newspaper about his adventures, such as one occasion when he was temporarily invalided to the Suez Hotel and was promptly asked by General Gordon, Governor-General of Sudan, to do all of the general’s French correspondence while at the hotel.

In 1879 Langton joined the Indian Political Service, which at that time was also responsible for some British territories in northern Africa. In 1884 the British government signed a treaty with the Somali Sultans, allowing them to establish a protectorate known as British Somaliland. With his soldiers, Langton was sent to the newly established capital, Berbera, and became the first Administrator, a post he retained until 1893. British Somaliland often came under attack from the Sultan Nur and the Dervishes, who once looted all the camels and cattle of the British. Langton ordered his soldiers to kidnap the Sultan’s wife and infant child – holding them until the animals were returned.

Ill health forced Langton to retire at a young age. He settled in Ealing, London, and married Laura Forbes. Their neighbour was Llandudno-born novelist Edith Nepean. In one of her books she based the character of a “gallant Political Officer” on Langton. He died in 1927 at a hotel in Monte Carlo, aged 71, but his body was taken to the Great Orme for burial, probably at Edith’s instigation. He left more than £16,600 to her in his will (Laura had predeceased him) and Edith was buried near his grave in 1960.