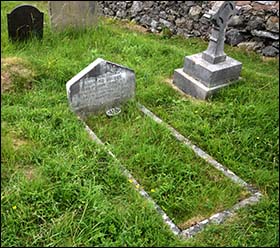 John Bright MP was famous in the Victorian era as a reformer from Rochdale. On holiday in Llandudno in 1864, he took his family for a stroll through the St Tudno’s churchyard, on the Great Orme. His five-year-old son Leonard suddenly said: “Oh mama, when I am dead I want to be buried here.”

John Bright, then aged 35, and his wife Margaret laughed at the child’s innocent remark. That night Leonard became ill and within a week was dead of scarlet fever.  A place for the grave was found near the church door.

John Bright became a great benefactor to Llandudno. The local grammar school was named after him. He addressed public meetings, helped to build the town library and provided incomes for some of the aged poor of the town.