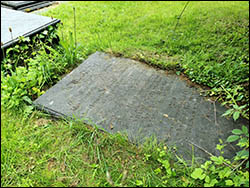 When Conwy’s workhouse was opened on Bangor Road in 1859, Mary and William Thomas were appointed as managers. They both spoke Welsh – which was an essential requirement for the job.

The workhouse of the Conway Union provided a home for hundreds of poor people at a time. They had to work for their shelter and food.

Paupers needed a certificate from the local relieving officer to gain admission, but William over-rode the bureaucracy one night in 1864 after a “tidily dressed” woman was found having a fit outside the town walls. A police constable and doctor took her to the relieving officer, who had already gone to bed and refused to sign the certificate. They took her to the workhouse anyway, and William immediately took her in “on his own responsibility”. It emerged later that she was a dressmaker’s servant from Gresford. She recalled being abused by two men and having six shillings before falling ill.

The workhouse was overseen by the local Board of Guardians. In 1867 the chairman expressed thanks to the master and matron because the house was a model of “cleanliness, discipline and regularity”. The other guardians applauded.

Mary died in 1874, aged 66. Normally married couples managed workhouses, but William was allowed to continue as master in Conwy with his niece, Mary Anne Thomas, as matron. She died before he did. William retired about 10 years before his death in 1892, aged 80. Their gravestone also commemorates their infant son Edward, who had died in 1841.