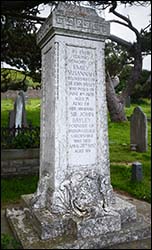 Educationalist Sir John Bayley and his wife Emily are buried here for a romantic reason: he proposed to her while they were visiting Llandudno.

A coal miner’s son, he was born in 1852 in Ashton-under-Lyne, Manchester. Even as a teenager he showed an aptitude for teaching. At the age of 27, he founded his own school in Wellington, Shropshire, to put into practice his belief that pupils needed individual attention rather than being taught as if they’d been turned out in “stereotyped fashion”. The school, renamed Wrekin College in 1921, was a great success. In 1976 it became one of the first public schools to admit girls as well as boys. Alumni include Brian Epstein, who managed The Beatles. 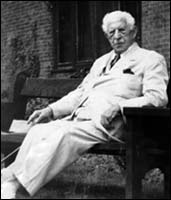 John Bayley was a friend of David Lloyd George, the Liberal Prime Minister whose constituency included Llandudno. He stood, unsuccessfully, as a Coalition Liberal candidate in a Shropshire by-election in 1920.

In the same year, he gave a wooden building to set up a club in Wellington for men who had fought in the First World War. He also helped to buy land for the club, which was renamed the Sir John Bayley Club in 1937 and continues as a bowls club today.