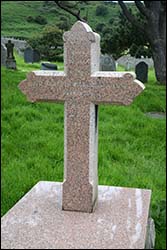 William Lloyd was born in 1782. His father Richard made a fortune from the flannel trade and from founding the Lloyds (Wrexham) Bank. Richard acquired the Bryn Estyn estate, Wrexham, and sent young William to Ruthin School.

William joined the army of the East India Company, serving with the Bengal Infantry for 27 years. He was wounded four times in the Mahratta War of 1817 and was a highly respected officer in his regiment.

Away from soldiering, Lloyd was a renowned explorer and cartographer. In 1822 he joined an expedition to the Boorendo Pass, high in the Himalayan foothills. He left the rest of his party at the pass to climb the western peak of Boorendo, which is 5,145m (16,880ft) high. In doing so, he became one of the first Europeans to ascend a Himalayan mountain.

Lloyd later wrote two books about his adventures in the world’s highest mountain range. He attributed his love of the outdoors to his childhood in the heather-clad Clwydian hills.

After retiring from the Indian army he returned to Bryn Estyn. He also owned a second home in Llandudno. He was knighted in 1838 and was a prominent Whig campaigner (the Whigs were forerunners of the Liberals in Britain). He was also High Sheriff of Denbighshire. With his military experience, he captained the Denbighshire Yeomanry and was made was made Lieutenant Colonel in 1854. Sir William Lloyd died on 16 May 1857, aged 70.