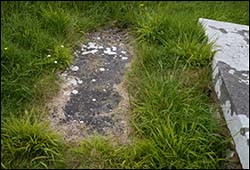 Thomas Kendrick, who discovered remarkable prehistoric bones on the Great Orme, was a well-known character in Llandudno.

After retiring as a copper miner, he opened a lapidary workshop, partly in a cave, on the Great Orme. It was above Tŷ Gwyn Road, overlooking the town. He picked pebbles from the beach and polished them to make into jewellery. The photo below shows him outside his workshop. 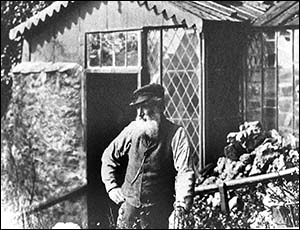 In 1880 he enlarged his natural workshop. When removing rubble from the rear he found four prehistoric human skeleton remains along with animal bones, including bears’ teeth, and animal bone jewellery. These remains were bought for £120 in 1902 by the Llandudno Library Committee for display in the library.

More recently, studies by the Natural History Museum have revealed that the cave was not lived in but was a burial place dating back 16,000 years. At that time, the ending of the last Ice Age, the sea was at least 16km to 24km (10 to 15 miles) away from the Great Orme. The bones indicated that these people had a diet of mostly seafood, including seals.

One of the items Thomas had found was a horse’s jaw, now in the British Museum. It was decorated by humans 13,000 years ago.