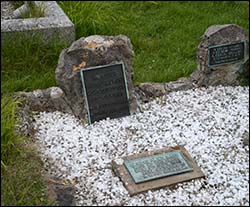 “Professor” Walter Beaumont was born in London in 1856. By the age of 12 he had already rescued seven people from drowning!

He became a professional diver and broke the world record for remaining underwater in a tank without a breathing aid, which he did for 4mins 35secs. He settled in Llandudno in 1895, where he performed diving exhibitions at the pierhead until 1904. Meanwhile he completed several world tours.

One of his acts involved diving into the water with his hands locked behind his back in police handcuffs, only to emerge from the water seconds later with his hands free. His “Fire Dive” was also famous; he would be bundled into a sack that was sprayed with flammable liquid and set alight before he dived into the sea – an enthralling sight when performed at dusk! You can read about his antics on our page about his memorial near the pier.

Walter also taught ladies and children to swim. By May 1903 he was credited with saving over 120 people from drowning, and this was marked by a banquet in his honour. He was also licensee of the King’s Head pub from 1898 until bankruptcy in 1910.

He moved to a relatively quiet life as licensee of the Ferry Hotel in Tal-y-cafn. He took people on trips on the river Conwy in his boat, called Happy Thought. In 1924 he rescued the boat after it had become swamped while anchored on the river. It was thought that his death a few weeks later, aged 69, was the result of illness contracted when he went into the cold river water to  save the boat.

The Latin on his grave translates as: “Born to swim” and “Death snatched from the waves”.