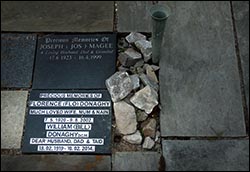 Bill was born in Liverpool on 13 February 1919, the third eldest of seven live siblings.

He joined the King’s Own Regiment, then moved to the Cheshire Regiment as a machine gunner before the Second World War broke out. He saw active service in North Africa, including El Alamein, before taking part in the landings at Salerno, Italy. It was here that he was seriously wounded in the fighting at Montecorvino airfield but continued to give orders, an action that won him the Distinguished Conduct Medal.

His medal citation records: “His courage and leadership were instrumental in delaying the enemy for a considerable time, enabling other troops to reorganise successfully. When his own section was ordered to withdraw, his wounds were such that he had to be assisted from his position. In spite of this he continued to direct the withdrawal, to encourage the men, and organise a new section position. Throughout the whole action he showed leadership and courage of the highest order and exceptional devotion to duty.”

Following his recovery he spent the remaining war years as a PT instructor for the new recruits before being demobilised. He raised a family with his wife Florence and died on 10 February 2014.