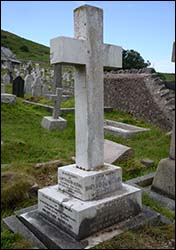 During the First World War there were a number of Red Cross military hospitals in Llandudno. At the outbreak of hostilities, William Lecomber (a brewer from Manchester who is also buried in St Tudno’s churchyard) put his house, Red Court on Church Walks, at the disposal of the military to use as a hospital. As the war progressed and more casualties came to Llandudno, the Red Cross took over the YMCA hostel, The Balmoral, in Trinity Square as there were no longer enough beds at Red Court.

Aldwyth Katrin Williams was the only daughter of the Rector of Llanbedr-y-cennin, the Rev Robert Williams. She enrolled in the Voluntary Aid Detachment in the earliest months of the war and three times a week travelled to Llandudno from her home in the Conwy Valley, volunteering at Red Court and then The Balmoral. Her duties were varied and included cooking and cleaning as well as nursing; she was described as having a “sweet, cheerful disposition” and was very popular with the wounded soldiers. Aldwyth died aged 26 of influenza on 8 November 1918, just a few days before the Armistice.

On the day of her funeral, the hearse paused outside The Balmoral. The nursing staff and wounded soldiers, many having to be pushed in their wheelchairs, joined the cortege and followed the carriage through the streets of Llandudno to St Tudno’s Church. The service was conducted by the Rector of Llandudno, Llewellyn Hughes, who had lost a son in the war.