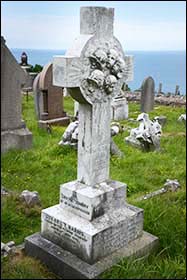 Edward Thomas Harris was a driver and brakesman on the the Great Orme Tramway. On 23 August 1932 he was controlling the descent of No.4 tram when disaster struck. With him on the platform was 12-year-old Margaret Worthington, who had just performed her daily duty of taking dinner to her father. He worked in the winding house, halfway up the route to the summit.

As the tram approached Black Gate and the start of a steep drop – a one in four gradient – it suddenly lurched forward and gathered speed. The driver applied the brake but this had no effect, so he seized Margaret in his arms with the intention of jumping off the platform with her. They jumped just as the tram left the track.

The tram hit a wall, tipping partly to one side. Edward, aged 30, was killed instantly under the tram. He was found with one arm round Margaret, who was seriously injured. She died some two hours later in hospital from her injuries. She was a pupil at Lloyd Street School (which became a whisky distillery in 2021).

The cause was established as the failure of the drawbar, which connected the tram to the underground haulage cable. Of the 50 or so passengers, 10 were seriously injured. Their compensation claims ruined the tramway company. The tramway reopened again in 1934, under new ownership.