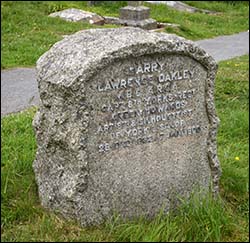 Harry Lawrence Oakley was born in York, the son of a chemist. From an early age he showed an aptitude for paper cutting – producing silhouettes cut from pieces of black paper using just a small pair of scissors. He studied at Leeds School of Art and then the Royal College of Art in London, where he was awarded his ARCA in 1908.

Harry enlisted in the Yorkshire Regiment (the Green Howards) at the outbreak of the First World War in 1914. On leaving to join his battalion, he apparently left a note in the window of his Scarborough studio stating that he was "Off to silhouette the Kaiser".

From the trenches of the Western Front, Harry began to send back his unique depictions of the humorous side of “life on the front”. Many appeared in The Bystander magazine, in a spread entitled “Trench Life in Silhouette”. After being wounded, Captain Oakley was transferred to regiment headquarters. When the Prince of Wales visited in January 1919, Harry cut the future King’s silhouette portrait. 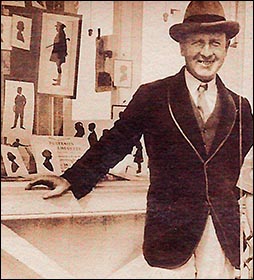 Harry left the Army and resumed his career as a silhouette artist. His commercial projects included advertisements for Selfridges and the London & North Eastern Railway, and his images appeared in magazines and periodicals. Some examples of his work are held by the National Portrait Gallery, London.

In summer 1922 Harry started to operate out of a kiosk on Llandudno pier, “cutting” the portraits of thousands of holidaymakers. The photo shows him at the kisok in 1930.

Out of season, he worked in London and other cities. He returned to Llandudno every summer until 1958 when another silhouettist, Leslie Leach, took over his pier kiosk. In 1960 Captain Oakley suffered a stroke and died. His ashes were interred at St Tudno’s on the Great Orme.