Stephen Dunphy was born in Dundalk, Ireland, in 1845. His father was a teacher. As a child he moved to Llandudno with his mother, Fanny Dunphy. She started the family business in 1850 in Back Mostyn Street, now Somerset Street, where she baked muffins. 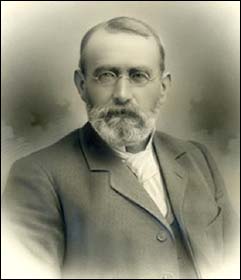 He spent 11 years as a mariner before succeeding his mother in 1857 and building a warehouse and bakery in Market Street. Dunphy & Sons grew to encompass several high-class grocery shops, bakeries, and wine and spirit merchants, in Llandudno and nearby towns. Stephen was also a director of several other companies, including the Llandudno Pier Co. and the Llandudno and Trefriw Steamship Company. He was the local agent of the Shipwrecked Fishermen’s and Mariners’ Society.

Stephen and his wife Catherine had three girls and five sons. Commemorated on their grave is their son Lieut Bernard Dunphy RN. He lost his life in the First World War, when the converted ocean liner HMS Bayano was torpedoed and sank quickly in March 1915. He was aged 33. Their son Jack became a vet, while Richard and Arthur joined their father in the business. Their son Charles became a lawyer.

Times changed, as did the grocery business, and in 1972 Dunphy & Sons was closed down. The site of the warehouse and bakery is now the Cottage Loaf public house and restaurant, but some traces of the earlier building remain.