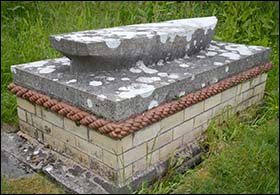 The shape of a sailing ship’s hull was carved from a large slab of stone to cap this unusual tomb. Notice also the course of bricks shaped to resemble a ship’s rope. 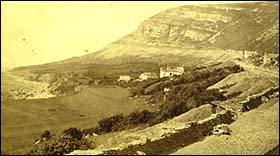 The “Sailors’ Home” got its name because four brothers lived there and all had been mariners. It is probably one of the houses visible in the photo (right) of the Marine Drive under construction.

When his seafaring days were over, Thomas Evans became a night watchman at Llandudno Pier. The Llandudno Advertiser’s obituary said he was about 69 years of age and was “well known in the town and greatly respected for his kindly ways and genial disposition”. His funeral was attended by many friends and relations.