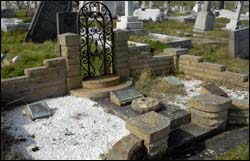 Sir William Malesbury Letts was one of the most remarkable personalities in the British motor industry. He was born in 1873 in Northamptonshire and moved to Llandudno in 1902, living at this house in Church Walks before settling at Eryl Fryn, Bodafon.

His career began with selling nearly 1,000 steam cars in just a few months. In 1903 he drove an Oldsmobile up and down the steps leading to the terrace of London’s Crystal Palace. In 1904 he drove the same vehicle to Snowdon summit in under 90 minutes.

He and his business associate were the first to show the War Office that cars (rather than horses) could be used for army transport, and so began the Motor Volunteer Corps.

William was a founder member of the Automobile Association, formed because motorists were being prosecuted for speeding. William thought police speed traps jeopardised the future of motoring, and therefore of his business. From among his staff, he formed a squad of 20 cyclists who warned motorists of the whereabouts of speed traps. 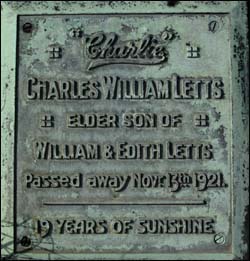 As managing director of Crossley Motors, he was involved in supplying vehicles and aeroplane engines for the armed forces in the First World War. In 1922 he was appointed High Sheriff of Caernarvonshire and knighted. He had many local interests, including membership of the Llandudno Amateur Operatic Society. Before his wife Edith died in 1943, prominent guests to their Llandudno home included former Prime Minister David Lloyd George and stage personality Sir Harry Lauder.

Also buried in this plot is their eldest son Charles, who died in 1921 of heart failure following rheumatic fever. He was 19 years old and studying at Leys College, Cambridge. Mourners who attended the funeral included Lord and Lady Beaverbrook. The cast memorial plaque (pictured right) features “Charlie” in a font resembling automobile logos of the era, including that of Crossley Motors.