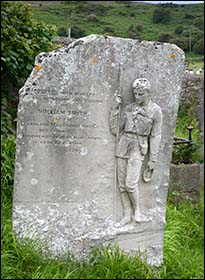 William “Zulu” Smith was born in London and arrived in Llandudno in 1879, after living in South Africa and, before that, India and South America. He had also travelled to China.

Zulu had gained his nickname for his frequent excursions into Zululand (in South Africa) as a youth. He set up as a printer in Llandudno and became known for his generosity. He would waive his fees whenever printing was needed for a benefit concert for the poor and needy.

In 1885 he launched The Llandudno Advertiser, which he kept for just one year before selling it. For that year, Zulu was the newspaper’s reporter, editor, compositor and printer!

In his spare time he was an enthusiastic swimmer and mountaineer. He was said to have reached the summit of every Welsh mountain from 1879 until his death in 1895. His gravestone depicts a mountaineer and was designed by a fellow member of Llandudno Mountaineering Club.