In memory of Arthur Fitzgerald 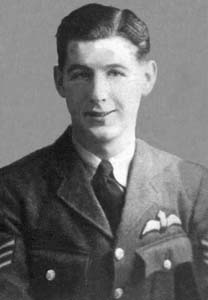 Arthur was born in Newport in February 1923, one of three sons to Gerald and Harriet Fitzgerald, writes Adrian Hughes.

After attending Eveswell and Hatherleigh Central Elementary Schools, Arthur was accepted into Newport’s St. Julian’s High School at the age of 12. There he attained seven good exam passes, in early 1940. By then the Second World War was in its infancy, and Arthur applied to the RAF. While waiting for his pilot training course to begin in spring of 1941, he took various jobs including a taxi driver and a Great Western Railway clerk.

On arrival at his training base in April 1941, Pilot U/T (under training) Fitzgerald was initiated into the ways of the RAF – kit layout, inoculations, marching (at 160 paces per minute!) and saluting. Later he attended lectures on aircraft recognition, mathematics, navigation, and Morse code (eight words per minute). This was as well as many hours of physical training.

In early 1942, Arthur travelled by train to the Scottish port of Gourock and sailed to Canada. In the vast Canadian countryside, he and his fellow cadets could put into practice much of what they’d learnt in Britain. Advanced training then followed, in the USA. He returned to the UK to complete his training.

On June 8, 1943 Arthur Fitzgerald was posted to 207 Squadron, based at RAF Langar, Nottinghamshire. Just four days later, he completed his maiden operational flight, piloting a Lancaster bomber in a raid on the German town of Bochum which involved 503 RAF aircraft. In August 1943 he was involved in Operation Hydra, a raid on the German town of Peenemunde where the Nazis had a research station and were developing V1 and V2 rockets. In all, Pilot Officer Fitzgerald completed 12 missions over enemy territory.

His thirteenth mission took place at the end of August 1943 – a night operation to bomb the German city of Nuremberg along with 673 other RAF bombers. Arthur’s Lancaster bomber was intercepted by a Luftwaffe night fighter and crashed on Markung Hohenburg, 60 miles west of Nuremberg. All seven crew were buried in a cemetery at Schwäbisch Hall. After the war they were re-interred in adjoining graves in Durnbach War Cemetery. Arthur Fitzgerald was 20 years old, and said to be the RAF’s youngest Pilot Officer at that time.