In memory of Cyril Evan Robinson 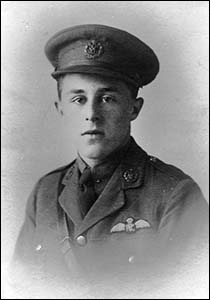 Cyril was born on 8 August 1899 in Chorley to Evan George and Mary Louise Robinson, writes Phillip Jones. Evan was an assistant ironmonger in Manchester. Mary and her sister, Eliza Anne Griffiths, both lived in the household and were from Llansantffraed, near Rhayader.

The Robinsons moved to Radnorshire early in Cyril’s childhood, and Cyril’s father opened his own ironmongery business in Hundred House, near Builth Wells. They settled at Ithon Villa in Station Road, Llanelwedd (just over the river from Builth). The family then included Phyllis, Cyril’s younger sister.

After his schooling, Cyril worked for two years for the American Express Bank in Liverpool.

He enlisted in the Royal Flying Corps in June 1917 and began his training. In October, soon after his 18th birthday, he was promoted to Second Lieutenant on probation (a probationary period was often applied). By then he was qualified to fly three types of aircraft.

His rank was confirmed in July 1918 and he was sent to France to join 27 Squadron as a pilot. He flew the De-Havilland 9, a single-engine two-seat bomber. William Houston Telfer, of Newcastle upon Tyne, was his observer.

Cyril and William both died instantly. Both were 19 years old. They are buried next to each other in Coulommiers, France.