In memory of Emrys Owen 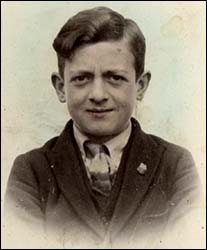 Emrys Owen was born on 9 February 1920 at 2 Groesffordd Cottages, Llechwedd, Conwy, writes nephew David Hughes. Emrys was the eldest child of William Owen Owens and Kate Owens (nee Croote) and is pictured as a child on the left.

William served with the Royal Welsh Fusiliers in the First World War and with the Home Guard in the Second World War, when he was an employee of Crosville bus company. He is in his Home Guard uniform alongside Emrys in the photo below right.

Emrys had two sisters, Dorothy (Dot) and Joyce, and a brother William (Bill). Curiously, the children had the surname Owen, not Owens. The family moved to a house called Bon Marche in Berry Street and to 2 Erskine Terrace in Conwy (known at the time as Conway), and later to Marl Crescent in Llandudno Junction.

After his schooling in Conwy, Emrys worked for Jones Brothers butchers in Conwy. He was a member 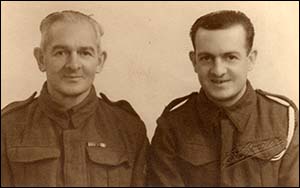 of the Territorials before the Second World War, in which he served as a Fusilier in the 8th Battalion of the Royal Fusiliers (City of London Regiment).

The Allies invaded Italy in September 1943 and Emrys’ diary records that he left Glasgow on 15 November and landed at Naples on 1 December. On 2 January he was paid 2,400 Lira for leave. On 4 January he attended a church service and celebrated Christmas “with a good dinner”.

He records crossing the River Volturno in boats on 13 January, and being “happy” the following day when he received a letter from home. His last diary entry, dated 16 January, records that he “moved from Casale to ___”. He was not allowed to give his new location, in case the diary fell into enemy hands, but it’s known that the Battalion crossed the River Garigliano and attacked the adjacent Monte Damiano. The Germans launched a counter-attack on 20 January.

Emrys was killed on 21 January 1944. He was 23 years old. His relatives believed that he died in a booby trapped building, but this is not confirmed. His body was buried at a spot recorded with a map reference and exhumed on 16 December 1944 for reburial at Minturno War Cemetery.