In memory of Evan Edwards 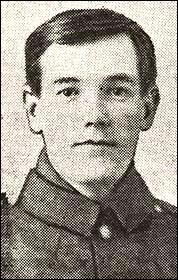 Evan Edwards was the only son of John and Sarah Edwards, who lived at 20 Phillip’s Terrace, Senghenydd. He was born in Aberdare.

After leaving school he began a career in the grocery trade. He worked for a grocer called T Roberts in the Cynon Valley. He was later employed by Pegram’s and the Star Tea Company in Aberdare. At this time he lived in Cwmbach, near Aberdare. He continued to attend chapel, and was a member of his local Sunday School.

He enlisted in Porth, Rhondda Valley, as a Private with the Welsh Regiment. Senghenydd was listed as his town of residence. He fought on the Western Front with the 15th Battalion.

He was 25 years old when he was killed in action in the Somme region of France on 10 May 1918. He is buried at Martinsart British Cemetery, which is near Albert.