In memory of Fred Jamieson 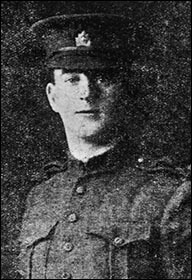 Frederick Victor Gilbert Jamieson was born in Belfast. His uncle Gilbert Eadie was a successful maker and retailer of footwear in Radnorshire. In his youth, Fred moved to Builth Wells to work in his uncle’s business there and later in Llandrindod Wells.

His parents William and Orcilla lived at a house in Llandrindod called Hazlehurst during the First World War. Fred had two sisters. One of them, Gwen, later became a Powys county councillor.

Fred worshipped at the Presbyterian chapel in Ithon Road, Llandrindod. He was a committed member of Llandrindod’s football team. He had a reputation for never shying away from a tackle, no matter how much bigger his opponent might be.

He emigrated to Canada in 1913 and returned to Britain in October 1914 as a Private with the Winnipeg Grenadier Guards. He was reported as being in the first contingent of Canadian troops to arrive in Britain for First World War service.

After training in England as a machine gunner, Fred left for France in February 1915. On 19 September 1916, heavy German bombardment killed all but one of his comrades in a trench on the front line. Fred fought on. Reinforcements were dispatched, but before they could reach his position there was a rush of German soldiers and Fred’s gun fell silent.

Allied soldiers re-took the trench in a counter attack the following morning and found Fred’s body beside his gun, which had jammed. German troops had taken all of Fred’s belongings, including the buttons from his tunic.

Fred was 29 years old and has no known grave. He is commemorated on the Vimy Memorial in France.