In memory of Fred Shopland 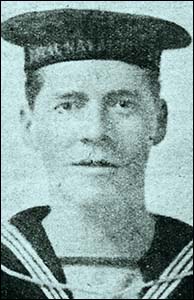 Fred Shopland was the youngest son of Walter and Sarah Shopland of 1, Brookland Road, Llandrindod Wells. He attended the town’s National School before taking a job at the WW Johnson pharmacy in the town. He later worked at the County Club. He sang in the choir at Holy Trinity Church and, on special occasions, sang solos there.

Shortly before the First World War began, he left Llandrindod Wells to take up a post with the Neath & Brecon Railway. He was working as a guard on the trains between Neath and Ystradgynlais when he enlisted with the Royal Naval Division. He was placed in the Drake Battalion and trained at Crystal Palace, London, and Blandford, Dorset.

Many young men had volunteered to join the Royal Navy since the outbreak of war. There were not enough naval ships for them all. Therefore, the decision was made by Winston Churchill, Lord of the Admiralty at the time, to re-train the sailors as soldiers, form them into naval brigades and send them to the front line to fight alongside the army.

Fred left Britain as an Able Seaman on 21 November 1916 and was soon in the trenches in France. In his last letter home he mentioned the cold of winter there. His parents, and local well-wishers, quickly assembled a parcel of warm clothing and gifts but by the time it arrived Fred had been killed.

He died on 4 February 1917, aged 21. He has no known grave and is commemorated on the Thiepval Memorial, in the Somme region of France.