In memory of Garnet Bufton 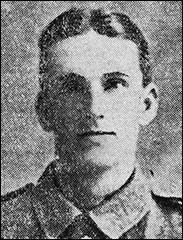 Garnet Bufton was the youngest son of Edward and Sarah Bufton, of Ithon Terrace, Penybont. He attended the County School (also known as the Intermediate School) in Llandrindod Wells before embarking on a civil service career with the General Post Office in London. He was promoted to Assistant Clerk (Abstractor) by January 1912.

He was working in the Engineers Testing Department when he volunteered for war service in April 1916. Leaving his wife and son at their home in East Ham, he joined the Royal Garrison Artillery and trained as a signaller.

He was killed in the early hours of 5 May 1918 on the Western Front west of Ypres, Belgium. He was 25 or 26 years old. He is buried at Brandhoek New Military Cemetery No.3.

Garnet’s brother Alf also served on the Western Front during the war. Their cousin Edward Evan Bufton, of Llandrindod Wells, was a Second Lieutenant in the York and Lancaster Regiment and died of pneumonia in November 1918, nine days after the war ended.