In memory of George, Claud and Archibald Lindsay 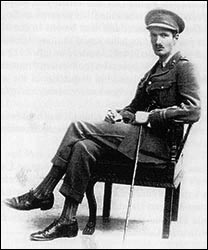 Colonel Henry Edzell Morgan Lindsay and his wife Ellen Katherine lost their three elder sons in the space of less than a year, writes Dennis Sellwood. Col Lindsay had served with the Royal Engineers in several Victorian conflicts. The couple lived at Ystrad Fawr mansion, where the hospital now stands. They had four sons and two daughters, Ellen and Nest.

The family also owned Pencerrig, a house in Radnorshire, and the Lindsay brothers are also named on the war memorial in Llandrindod Wells hospital.

George Walter Thomas Lindsay (pictured left) was born in 1891 and educated, like his brothers, at Stancliffe Hall, Derbyshire, and Wellington College, Berkshire. The college prepared young men for careers as military officers.

George joined the Royal Regiment of Artillery in 1911 and went to France in August 1914, soon after the outbreak of the First World War. He also served in Belgium and Greece before being invalided home in 1916. On recovery, he was attached to the Royal Flying Corps. He died, aged 26, after his plane went into a spinning nosedive and crashed at Filton, near Bristol, on 26 June 1917. He was buried in the family vault at Holy Trinity Churchyard, Ystrad Mynach.

Archibald Thurston Thomas Lindsay (pictured right) was born in 1897 and became a Lieutenant in the Royal Engineers. He left for France in October 1915 and was killed by a sniper’s bullet at Hébuterne on 26 March 1918. He was 20 years old and was buried at Foncquevillers Military Cemetery.

Claud Frederic Thomas Lindsay (pictured below left) joined the Royal Field Artillery in 1912 and sailed to France in August 1914. He survived action on the Western Front for most of the war, including at Mons and the Somme, and was Mentioned in Dispatches in 1917 for gallantry and devotion to duty in battle. In 1915 he took leave to return to Ystrad Mynach for his wedding. He married Dorothy Lindsay Forde, of Waterford, Ireland. 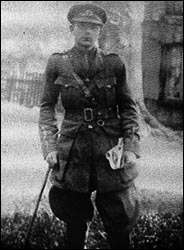 Claud was killed, aged 26, while commanding his battery in a rearguard action near Domart, France, on 31 March 1918 – just five days after Archie’s death. He was buried at Hailles Communal Cemetery. His son George was born in November 1918.

Nest Lindsay received the MBE in 1943 for her work as commander of the Auxiliary Fire Service in London’s East End during the Blitz in the Second World War. Her surviving brother, David, was born in 1910 and too young to serve in the First World War.