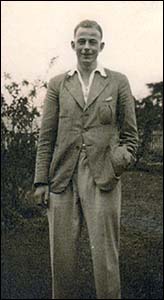 George Godfrey Stone Laws had two older siblings, Jessie and Kathleen, writes his niece June Derry, who was 11 years younger than him. His parents were Charles and Jessie Laws, who kept Ruthin’s only off-licence and a sweet shop next door, in St Peter’s Square, Ruthin.

Godfrey was educated at Ruthin School and Denbigh High School. The boys went to Denbigh, the girls came to Ruthin in those days. He was a good all-rounder at sports and had the makings of being a very good cricketer. When he was with the RAF (501 Squadron), he played with Len Hutton (England international, later Sir Len Hutton). He was invited to the Slazenger factory. They gave him a tennis racket, which I used all through my school career. 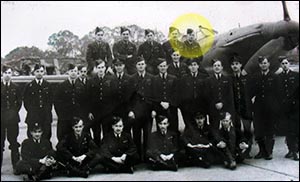 He joined the RAF in 1939 and fought in the Battle of Britain. He is sitting on the wing and nearest to the fuselage in the photo on the right.

He flew up to Sealand one night. My mother managed to get some petrol and went to fetch him in the car. She drove on those tiny slit lights that they had. When he got home he was still wearing his full uniform – a sort of khaki brown and lined inside with fur a teddy bear’s. He was so exhausted he just lay on the bed and fell asleep. They lived quite a riotous life, because they never knew when their time would be up.

He was a likeable young man. He couldn’t drive a car. We went with him once in our Triumph Dolomite. We got to the crossroads the other side of the cement factory and he shot across through a red light. He was clueless with speed – he had learned to fly a plane before he learned to drive a car. He was foot down.

He was a very likeable young man. He was more than six feet tall and had difficulty getting into aircraft. He couldn’t fit into a Spitfire

He died on 28 March 1941. His plane stalled at Stoke Gifford airfield (near Bristol). They wouldn’t let my father see Godfrey’s body. The force of the impact caused damage to his gold ring and his gold pen.

His death ruined my grandmother. She was badly affected mentally. She and my grandfather are buried with Godfrey at St Meugan’s in Llanrhydd.