In memory of George Henry James 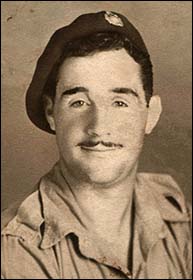 George Henry James was born on 31 May 1922 to John and Mary James, writes nephew Tudor James. The family lived in East View, Gilfach, Bargoed. George had three sisters and one brother. Their mother was from the Forest of Dean. Their father, from Bristol, was killed at Bargoed colliery when George was 12 years old.

George was a member of Bargoed Boys Brigade for four years. He played for Bargoed Rugby Club and liked classical music. After leaving Bargoed Secondary School aged 15, he started working with his older brother in the “old pit” at Bargoed. Disliking the work, he went to London to seek other employment. His mother went with him, although in poor health. She died in 1940.

George had an older cousin in Slough and worked 10 months as a jigger in a factory. Then he was a riveter on petrol storage tanks for two years. He worked briefly for a roofing company.

On 3 September 1942 he joined the Royal Marines at the commando training centre in Lympstone, near Exeter. He is in the centre of the back row in the photo of six new recruits at Lympstone. 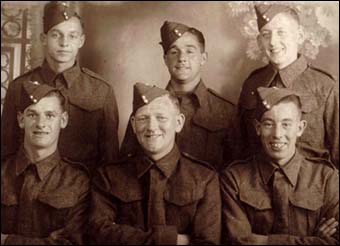 George was only 5ft 5ins (1.65 metres) tall and of slight build, but after basic training was earmarked as a potential marine. After specialist training, mostly in Scotland, he was appointed Lance Corporal on 2 July 1943 and soon after assigned to 40 Commando.

He sailed to the Mediterranean in a convoy of ships and joined 40 Commando in Sicily in October. 40 Commando were involved in many hazardous operations in Italy and Corfu in the following months.

In April 1945 George took part in “Operation Roast”, which began with amphibious landings by 40 Commando at Comacchio, north-east Italy. The commandos’ task, together with Italian partisan fighters of the 28th Garibaldi Brigade, was to draw out the German forces, making it easier for the 8th Army to pass through the Argenta Gap. The Germans in northern Italy finally surrendered on 29 April.

George did not live to witness the victory. He trod on a landmine during the beach landing on 11 April. He was taken to a field hospital but died of his wounds the following day. He was buried at Argenta Gap War Cemetery.