In memory of George Mathews Cox 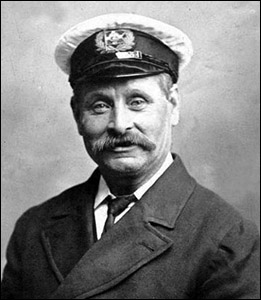 George Mathews Cox was born in Holyhead in 1858 to John and Mary Cox. Following in his father’s footsteps, George became a seaman.

He married Mary Catherine Jones in 1888. In 1911 the couple were living at 3 Cybi Street, Holyhead, with their children, several of whom were grown-up.

As a member of the Mercantile Marine Reserve, he served as an artificer/boilermaker on HMS Tara during the First World War. Before the war, the ship was the London & North Western Railway’s SS Hibernia, operating between Holyhead and Ireland. It was requisitioned by the Admiralty in 1914 for use as an Armed Boarding Steamer, initially in the Irish Sea and later in the Mediterranean. Most of SS Hibernia’s crew continued on HMS Tara, supplemented by some Royal Navy officers.

On 5 November 1915, HMS Tara was torpedoed by a U-boat, with the loss of 12 crew members. The 92 survivors in the ship’s lifeboats were towed by the U-boat to Port Bardia, where they became prisoners of war. Guarded by men from the Senussi tribe, they were marched into the Libyan desert and kept in harsh conditions for four months, until they were rescued by a British armoured car column.

During the period of captivity, four of the prisoners died of illness. George Cox was among them. He died on 5 January 1916, aged 57, and was buried at Bir Hakeim, a desert oasis. His body was later transferred to Hadra War Memorial Cemetery in Alexandria.

A fifth member of HMS Tara’s crew died of illness after the group’s rescue.

Textiles were a mainstay of the Welsh economy for centuries, and now you can discover many of the industry’s stories by scanning our QR codes at relevant sites. We’ve also listed the locations on this web page so that …