In memory of Harold and George Gough 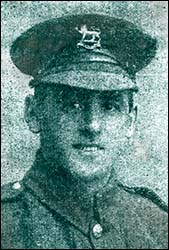 Ernest Harold and Arthur George Gough were sons of Richard and Elizabeth Gough. They had several siblings and the family lived at a house called Stoneleigh, in Llandrindod Wells.

Harold was educated at the town’s National School. He worked with his father as a stone cutter and monumental mason before enlisting with the Herefordshire Regiment. He was later attached to the Border Regiment.

He was taken prisoner of war at Beaumont Hamel, France, on 18 November 1916. He died while being held in Mecklenburg, Germany, on 28 March 1917, six days after writing a letter to his parents to say that he was fit and well. Private Harold Gough (pictured right) was 28 years old and was buried at Hamburg Cemetery. 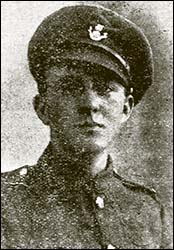 George Gough (left) worked as a goods clerk for the London & North Western Railway, which owned the railway line and station in Llandrindod Wells. He became a Private in the Loyal North Lancashire Regiment. He died, in a French hospital, of war wounds and the effects of gas poisoning on 20 May 1918. He was 19 years old and was buried at St Sever Cemetery, in Rouen.

Sydney Gough, brother of Harold and George, survived the war. For part of the war he was in hospital in Salonika, undergoing treatment for malaria.