In memory of Ian Alexander Baxter 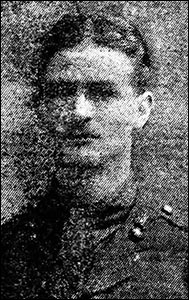 Ian was educated at Llanfairfechan National School before winning a scholarship to Friars School in Bangor in 1906. He graduated with a BSc from the University College of North Wales, Bangor, in 1914.

Also in that year he joined the Royal Welsh Fusiliers, and was soon given an officer’s commission. He worked as a range-finding instructor at Kinmel Camp, near Rhyl, before going to the Western Front in 1915.

In 1917 he was awarded the Military Cross for conspicuous gallantry. According to his citation: “He displayed great coolness and courage in reorganising the front line under heavy fire. He set a splendid example throughout.”

On 30 May 1918 Captain Baxter and a friend from Bangor, Lieutenant Colonel H Lloyd Williams, found themselves surrounded by Germans and in command of men from various units which had been dispersed in the fighting. The officers decided to fight their way out of the encirclement. Almost as soon as they had broken through, a shell landed nearby and killed Ian almost instantly. He was 24 years old. He is buried at Chambrecy British Cemetery, near Reims, France.

He was Mentioned in Dispatches for his bravery in 1918.