In memory of James Tunley 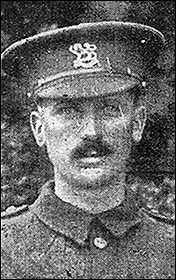 James Tunley’s parents were Nathaniel and Harriet Tunley, who lived at Midway Villa in Llanbadarn Fawr. Nathaniel was a gardener and farmer.

James was born at Llanyre. In 1911 the family was living at 2 Hill Cottage, in the area known as Penybont Station.

After his schooling, James worked at the Llandrindod Wells Golf Club, alongside local golfing professional George Humble. Later he moved to Birmingham, where he worked at the Robin Hood Golf Club in Solihull.

James enlisted at Llandrindod for military service in the First World War. His brothers William, Vincent and Albert also joined the armed forces.

Private James Tunley served with the Herefordshire Regiment initially, and later with the Border Regiment. On 1 April 1917 he took part in a successful offensive to capture the French village of Savy, near St Quentin. He died in action on that day, aged 31. He left almost £79 in his will. He is buried at Savy British Cemetery.

Nathaniel and Harriet also lost two of their four daughters at around this time. One of them died in August 1918 after a painful illness. Another son suffered a head wound in the war.