In memory of John and Owen Hansen 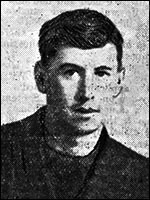 John Hansen and Owen Edward Hansen were sons of Captain John Hansen and his wife. The family lived at 62 Madoc Street, Porthmadog, and worshipped at Capel Ebeneser, a Wesleyan chapel.

Both sons followed their father into seafaring. Owen and his father were sailing the Porthmadog schooner James Bibby in March 1910 when it sank off the Naze, Norway. The crew had just enough time to enter the lifeboat.

John (pictured left) had a similar experience with his father in January 1914. They were both on the three-masted schooner Harvest Home, owned by W Thomas & Son of Amlwch, when it sank in a storm while carrying china clay from Cornwall to Adrossan, Scotland. As they passed Anglesey the ship began taking on water. Captain Hansen ordered a course for the sheltered St Tudwal’s Roads, near Abersoch, but the labouring ship hit rocks near Bardsey. The crew of four had just enough time to board the ship’s lifeboat and rowed hard to reach Abersoch at 6am.

On 20 April 1916, John Hansen was on the barque Penrhyn Castle when it left Bahia Blanca, Argentina, bound for Fremantle, Australia, with a cargo of wheat. The ship and its crew were never seen again. 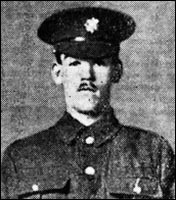 wen (pictured right) joined the army in October 1914. This was the earliest he could enlist after the war began, since he had been on a homeward voyage from China before then. He fought with the Scots Guards and was wounded in the Battle of the Somme. He died, aged 24, on 16 September 1916, soon after being taken to hospital. He was buried in Corbie, in the Somme region.

Captain Hansen was away on a voyage when the telegram notifying the family of John’s death arrived. On the next day, Mrs Hansen received a postcard from France. The card, written by a nurse on Owen’s behalf, informed them that Owen was entering hospital.