In memory of John Edwin Hughes 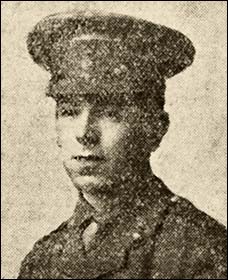 John Edwin Hughes was the only son of Edward and Mary Hughes, of Y Felinheli. The family lived at 27 Augusta Place. His grandfather Captain John Thomas lived in Aberystwyth.

Edwin studied at Carnarvon County School, where he received an honours certificate in 1902. He graduated in history with First Class honours from Bangor College, and became history master at Llandudno Central School. He was elected vice-president of the Caernarfonshire schoolmasters’ union in May 1914.

He enlisted with the local Pals in the Royal Welsh Fusiliers soon after the outbreak of war and served as a Private for six months before being given a commission as a Second Lieutenant. He and his wife Sydney Ellen visited his parents while he was on leave in August 1915.

Edwin went to the Western Front in May 1916. He was wounded at the Somme on 18 August 1916 and died at a field hospital the following day, aged 29. He was buried at Dive Copse British Cemetery at Sailly-le-Sec, c.20km east of Amiens.

His sister Ceinwen also played a part in the war. She trained as a nurse in Manchester and was appointed to a military hospital in Wrexham. Later she worked at the First Western General Hospital in Caerleon, near Newport. Her devotion to the task won the praise of wounded soldiers and of the military authorities, and she was officially Mentioned in Dispatches for her work.