In memory of John James Langford 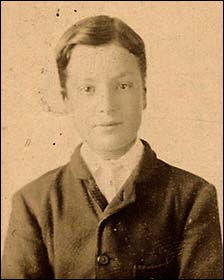 John James Langford was born in Llandrindod Wells to Mr and Mrs J Langford. They lived at 2 Denham Terrace in the town. John had sisters named Laura and Gertrude. Jack, as he was known, worshipped at the Presbyterian chapel in Ithon Road.

He enlisted in the town on 8 February 1916 and joined the 6th Battalion of the King’s Shropshire Light Infantry. His military career was brief. In August 1916 he was fighting with his battalion’s A Company in the Somme region of France when he was badly wounded. Medics were unable to save him, and he died on 31 August 1916. He was 24 years old. He is buried at Heilly Station Cemetery in Mericourt-l’Abbé, a village near Albert.

Members of Jack’s family still have a letter which he wrote to Laura on 20 March 1916 from Hut 6 at Prees Heath training camp in Shropshire. He understood that he would soon be moving to another camp, 200 miles from home. He thanked Laura for sending a shilling (which “came in useful”) and some cakes. “I am going to have three or four when I get in bed and a smoke after, so that will go A1,” he wrote.

He also advised Laura to make the best of domestic life: “You would think it heaven to be at home if you had two or three weeks here.” But he continued: “Trench digging for us is fine sport as we got such a nice officer, and we are allowed to smoke all the time. He gave me two nice magazines to read last week. It’s quite a pleasure to be with him. We are still having very nice weather here. I am now lisening (sic) to the piano playing, as some of the boys play lovely.” The sound of the piano reminded him of being with his sisters.

With thanks to Peter Hanne (great nephew), Phillip Jones and Amanda Willis