In memory of John William Daniels 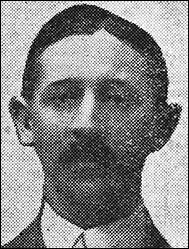 John William Daniels’ parents were William and Mary Anne Daniels. William was a draper and grocer in Llanbrynmair. The village post office moved to his shop in 1901, when he was appointed as the local postmaster.

After being educated at Machynlleth County School, Johnny became the village’s postal telegraph clerk in 1902. He later became the village postmaster and ran the post office with his sister Lizzie for several years. Johnny also had a brother, Richard Trevor.

Johnny was the organist at the Old Chapel and one of the most active supporters of Tafolwern Sunday School, which had its own schoolroom. He was secretary of the local sheep dog trials committee and treasurer of the Brynmair Lodge of Oddfellows.

In 1917 he joined the Royal Flying Corps, which became part of the newly formed Royal Air Force in April 1918. As an RAF air mechanic, he was posted to Italy with Commonwealth forces relieving the Italians in the area along the river Piave. He was attached to the Royal Garrison Artillery’s 171st Battery, which used aircraft to gather intelligence over enemy territory.

Johnny died of pneumonia on 23 October 1918. He was 32 years old and is buried at Giavera British Cemetery in Italy.