In memory of Llewelyn Charles Gillett 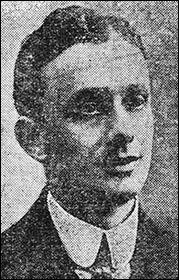 Llewelyn Charles Gillet (known as Charlie) was born to Charles Edmund Gillett and Grace Gillett, of Crawley Villa, Bethesda. Charlies senior was stationmaster at Llanfairfechan and moved to Bethesda when Charlie was about 10 years old. He remained the London & North Western Railway’s stationmaster in Bethesda for many years.

Charlie was educated at Glanogwen Boys’ School and sang in the choir of Christ Church, Bethesda, before embarking on his own railway career. He worked in the LNWR’s audit department at London Euston station for 17 years. Meanwhile, his sister Minnie worked briefly at Bethesda station and was promoted to Chester station after passing the LNWR’s book-keeping exam. His brother Tom also worked for the company, living at Station House, Deganwy,

Llewelyn left his railway post to enlist in the army in May 1915. After his training he served in Egypt with the Royal Buckinghamshire Hussars. He died on 21 November 1917, aged 35. He is buried at Jerusalem War Cemetery. After the war, Minnie expressed regret that Charlie’s grave was too distant for her to visit and place flowers on it.