In memory of Merfyn Jones 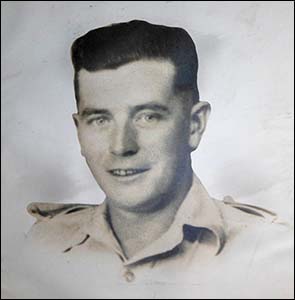 Merfyn Jones was born on 20 March 1921 at 26 Brynhyfryd, Clydach Vale, in the Rhondda Valley, writes niece Sharon Jones. He had three brothers – Bob, Emlyn and Hughie – and two sisters – Maggie and Nellie. His father, Henry Jones, was a collier and his mother, Margaret Ellen Jones, was a Sunday School teacher. In 1922, the family returned to North Wales and settled in Tanyfynwent, Gwalchmai, where they remained.

Merfyn had a happy childhood and attended Gwalchmai Primary School. He was a regular member of Moriah Chapel (A) and attended the Sunday School.

As a young man he enjoyed attending events in the Village Hall and spent many an evening hunting rabbits. He owned his own gun, a 4-10 double-barrel shotgun, which is still kept as a family heirloom. Merfyn joined his elder brother Bob in the construction trade, working as an employee of a local building company, Henry Edwards of Bryngwran. 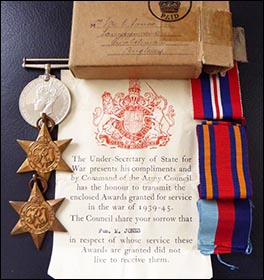 Three young men, Richard Hughes, Dickie Jones and Merfyn, from the village were called up for service at the same time. They were all close friends. Merfyn served as a Fusilier with the Royal Welsh Fusiliers.

Merfyn was a keen and articulate letter writer and often used humour to comment about his colleagues, particularly ones from Anglesey. In his last letter to his family, in February 1943, he expressed concern about his mother’s health, and hoped that he would s

War Office records show that Merfyn was last seen on the 6 April 1943, when he was manning a forward post in Burma. He was reported as wounded and missing. He was 23 years old.

Merfyn is also commemorated on the Rangoon Memorial in Burma, and on his parents’ headstone at St Morhaiarn Churchyard, Gwalchmai. He is listed in the RWF book The Red Dragon.