In Memory of Norman Owen 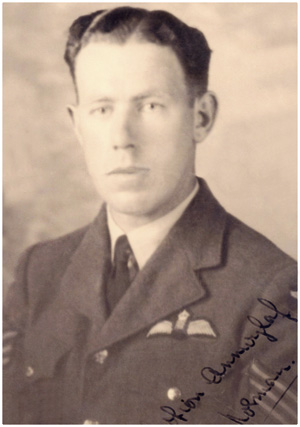 Norman Owen grew up on Pendared Farm, Llysfaen, with his sister and five brothers. In the 1930s he was a constable with London Metropolitan Police, serving at Hammersmith throughout the Blitz (the Nazis’ sustained bombing ofLondon). He volunteered to join the RAF and trained as a pilot at Turner Field,Georgia,USA. Completing his training inBritain, he sometimes took a detour to fly over Pendared Farm, where his mother would wave a sheet. This led to some local complaints about low flying!

He was awarded the Distinguished Flying Cross, backdated to 12 August 1944, for completing 36 sorties – a full operational tour – as a Lancaster bomber pilot with 207 Squadron, based at RAF Spilsby, Lincolnshire.

Having completed the tour, he became an instructor at Market Harborough, Leicestershire. On 13 August 1944 he was killed when travelling with a trainee crew in a Wellington LN281. The plane’s engine had caught fire and the plane crashed near Melton Mowbray. One crew member survived, the other six perished. The trainee pilot, Sgt Edward Mansell Roberts, is buried in Buckley, Flintshire.

You may download a larger picture here. When the page loads,
right click the image and choose "save picture as".