In memory of Patrick Anthony Turner

Patrick Anthony Turner was born on 14 October 1922 at the Royal Alexandra Hospital in Rhyl, writes Ruth Pritchard. His father was Thomas Turner, licensee of the Foryd Harbour Hotel. His mother was Norah, née Phillips. 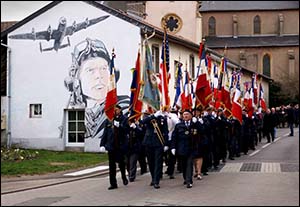 He joined the Royal Air Force Volunteer Reserve (100 Sqdn.) and went on his first operational sortie, serving as a mid-upper gunner, on 24 February 1944. His Lancaster bomber, JB604, took off from RAF Grimsby (Waltham) at 6.16pm. It was part of a massive attacking force of 734 aircraft – comprising 460 Lancasters, 169 Halifaxes and 11 Mosquitoes – to attack the Germans’ main production area of ball bearings.

JB604 was in the first wave and was reported to have been shot down by flak.  It has since been claimed that it was shot down by a German night fighter ace, Hptm Eckart-Willhelm von Bonin, at a height of 6,000 metres.

The plane was passing over the village of Marly, in the Moselle region of France, when it fell, causing damage to the village. Patrick was among five crewmen killed. Two others parachuted to safety and were taken prisoners of war. 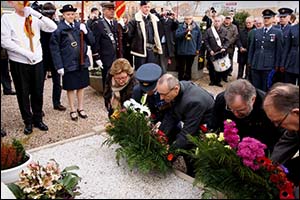 Sgt Turner and his four comrades rest in peace in the old village cemetery in Marly. The villagers still honour and remember them today, and have even painted a mural of a Lancaster and a crewman on a prominent house gable (see upper photo). Their graves are well cared-for and adorned with flowers all year round. The lower photo shows a ceremony at the grave.

Patrick is also remembered on the war memorials in Rhyl, Towyn and Abergele.

This memorial page was compiled with the help of M. Stéphane Cottel of Marly, who would be pleased to receive any further information about Patrick via the Feedback form.