In memory of Percy Pennington 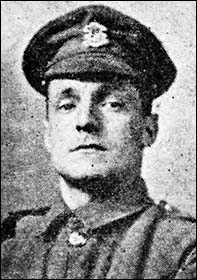 Percy Pennington was born in Darwen, Lancashire, in 1894. His father John was a paper maker, his mother Mary a weaver. The family later lived at 10 Kingsbury Place, Cwmaman.

Percy was a reservist before the war, and therefore was one of the first to be called up for war duty. He served as a Private with the 2nd Battalion of the Welsh Regiment and was involved in fierce fighting in several places, includling Loos, Hulluich and Givenchy. He returned home on leave for the first time in May 1916.

During the Second Battle of the Somme, he was hit by a sniper’s bullet on the night of 15 July 1916. He died soon afterwards at a casualty clearing station. He was 23 years old. 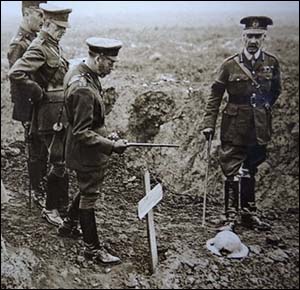 Private Pennington achieved a degree of posthumous fame when King George V was photographed saluting his grave, which was marked by a simple wooden cross amid the churned-up soil of the Somme. The photograph was reproduced in national newspapers.

Percy’s grave was lost during later fighting in this contested area of France. His name was later added to the Thiepval Memorial, which commemorates more than 72,000 British and South African soldiers lost at the Somme.

One of Percy’s friends, Lance Corporal Griff Philpin, also from Cwmaman, wrote to Percy’s parents: “I miss him greatly. He met his death doing his duty bravely and facing the foe.” Griff died on active service in France two months later.