In memory of Richard Evans 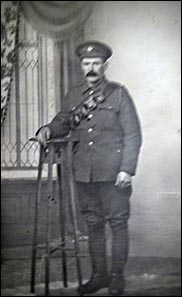 Richard Evans was born in 1883, at Teilia Bach, a small cottage on the outskirts of Gwalchmai, writes granddaughter Mrs Mary E Jones. He had a sister called Grace, who ran a bed and breakfast business at Woodbine House, Holyhead.

Richard attended Gwalchmai British School. Like many others in the village at that time, his main hobby was poaching with his greyhound. Indeed it is mentioned in Rev Emlyn Richards’ book, The Poachers of Anglesey, that Gwalchmai was renowned for its strong tradition of poaching around the 1900s. It is also believed that Teilia Bach, the family home of Richard Evans, kept greyhounds for local dignitaries, who did not wish to be associated with such activity. It was said that Richard, or “Dick Teilia Bach” as he was known locally, had the fastest greyhound in the area. This was considered to be an honour amongst poachers.

In 1902, he married his wife Mary Ellen and both lived at Tan y Graig Bach, Gwalchmai. They had five children: Lizzie, Olwen, Keisha, Eliazar and Richard.

In 1914, Richard (senior) was conscripted to join the Royal Army Service Corps. Shortly before the end of the war, he was discharged, having been a victim of the effects of the mustard gas attacks in the trenches. Sadly he passed away at his home on 26 October 1919, aged 36. He was buried at St Morhaiarn Church on 31 October 1919.

His son Richard lost his life while serving on board HMS Versatile during the Second World War.