In memory of Robert Evans 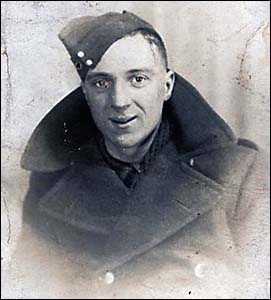 Robert Evans was born in 1918, at Penrallt Bach, Gwalchmai. He was the youngest son of Nan and Owen Evans and was one of many siblings.

During his early adulthood he was employed at Tre-Ysgawen country mansion, which was then the home of the aristocratic Pritchard-Rayner family.

After enlisting with the Royal Welsh Fusiliers, Robert Evans met and married Emily, who was serving in the Women’s Royal Naval Service. He served as a Fusilier in North Africa, where he died during a routine medical operation in 1944 at the age of 26. He was buried at El Alia Cemetery in Algeria.

With thanks to Robin Jones (second cousin) and Sharon Jones